Network Ten has branched into the Internet connected viewer space via TENplay, a multiplatform catch up TV and video portal that includes the most popular TEN, ONE and ELEVEN shows. Ten’s live events strategy in 2014 was to deliver more big sporting moments to people anywhere, anytime and on any device.

Network Ten required a fully managed app build for the XXII Winter Olympic Games in Sochi, and for the XX Commonwealth Games in Glasgow they required enhancements to the TENplay app to support a sports hub. Complete with content streaming, athlete info, results information and medal tally, tied together with a TV Guide service, the TENplay apps would be focused on providing a first class multi-screen, multi-platform consumer content experience designed with the end user as the top priority.

Live TV content was to be a mix of Ten and One HD curated broadcasts, plus there would be six additional streams delivered from both Sochi and Glasgow. Catch up content would need to be created from these linear streams with bookmarks to highlight key moments of each event. The International Broadcast Centre in Sochi and Glasgow would provide a range of data including results, schedules and medal tallies, which Network Ten required for the apps, websites and on-screen graphics for the broadcast.

“Working with Switch Media, we are able to offer Australians a viewing and engagement experience like no other for the XX Commonwealth Games, as we did for the XXII Winter Olympic Games from Sochi, Russia, in February. We are confident our digital coverage of Glasgow Games will be an outstanding success, as the Sochi 2014 On Ten App has been from the day it was launched.”

Switch Media was the key professional services and app builder for Network Ten’s Sochi Games coverage, and assisted with the TENplay advancement of a sports hub, allowing TEN to capture more users as a login was needed to watch Glasgow. Central to the solution was Switch Media’s cloud based video content management system, the Switch Media Manager, which delivered an 8 linear channel mosaic that operated across Android and iOS devices:

Using the Switch Media Manager, editorial users were able to mark the start and end point of any video to create bookmarks throughout the event stream allowing viewers to jump to key moments in a particular sporting event, with the time to publish being a few minutes from each event finishing.

Thanks to the huge successes of the 2014 Games coverage, in 2015 Switch Media has again partnered with Network Ten to deliver five additional live streams for their Formula One racing tournament online coverage. 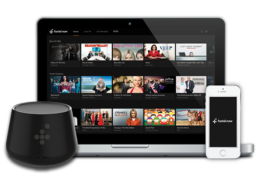 Stream the best choice of new shows, complete seasons and live sport, all on your TV.